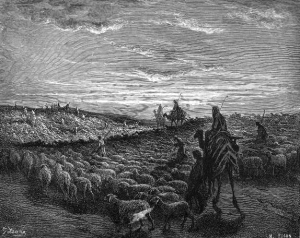 We have a great history as Christians. True, there are some dark parts to the history of the church, but for the most part when looking at those who really most desired to follow closely the pattern of Jesus, we do have an ancestry to be proud of. Space won’t allow me here to detail the many great lives of faith that have been lived throughout the centuries, but there are books and more books out there to do that for me. We have a wonderful heritage.

Some of them have seen God do great miracles (Smith Wigglesworth would be an example). Others have been known as radically generous givers, living without a care for their own needs and instead giving themselves extensively for the well-being of others (George Muller). Others have been great church planters and pioneers of the way to live by faith to many (John Wesley). Each of them achieved great victories which moved the church on into a new place and broke new ground which today, we are freely walking on – we are indebted to their lives and ministries.

But despite all this, we in our generation, must still be looking for a better day. It is one thing to admire the forerunners to our generation, and even to walk the ground they won. But it is another to actually stand with the same kind of faith as theirs – the same faith that seeks breakthrough into new areas, new things, that seeks a better country, a better day, a heavenly one.

Hebrews 11 speaks of Abraham seeking a heavenly country. I have always thought that meant he was really waiting to die and go to heaven. But on reflection, I don’t think this is necessarily the case. Because when Jesus, descendant of Abraham, came on the scene, He said “the kingdom of heaven is at hand,” and talked repeatedly about how the kingdom was coming in peoples’ present-day experience. When someone was healed, or a demon was cast out, He would tell them that the kingdom had come near them. Their own country was becoming a heavenly one.

Hopefully we too might desire to follow in Abraham’s footsteps, and to look for a better country, that is, a heavenly one. But does that mean we are simply waiting around for the millennium, or to die and go to heaven – some distant, future event which we can’t do much more about than we have done by getting saved? I don’t know about you, but I’m looking for this country to become a heavenly one, that is, through the constant in-breaking of the kingdom of heaven into peoples’ experience, it becomes more and more manifest in every community, every city, town and village, permeating the atmosphere and changing hearts and lives everywhere.

Ultimately, we do not see this yet! We have had great breakthroughs in the past, and there is more of heaven on earth now than when we began in the faith. But wars still go on. People still get seriously sick. Tragedies still occur. There is work to be done. We are looking for a better day, and it is our duty in looking for it, to persevere, persist, and doggedly pursue a better day, so that our goal becomes global transformation. Is this too large a thing to believe in? Did not God so love the whole world that He gave His Son? Does it not say prophetically that the kingdoms of this world have become the kingdom of our God and of His Christ? Does it not say that the meek shall inherit the earth? Does it not say that the knowledge of His glory shall cover the earth as the waters cover the sea? I could go on – time and again God’s promise of extreme hope and victory is to the whole world.

For this we require supernatural strength and vision, to sustain us. We will never achieve this in our own strength, but thank the Lord, He has a supply that will never run out. In calling us to global transformation, He resources us with everything we need. In the book of Acts we witness a church of extreme power and determination that was so strengthened because they were fuelled by the outpouring of the Holy Spirit. Today this too will provide the catalyst to our being launched into a fresh move of God in the earth – a great outpouring of the Holy Spirit which brings supernatural enablement to accomplish the mission of God among His people on earth.

We are grateful, always grateful, for the remarkable things He has done among us. We must never lose sight of those things but continually share their testimonies. But the Biblical theme of increase, the ever-increasing kingdom, going from glory to glory – and God’s heart from which this great theme came – cannot be ignored. We are looking for a better day – the day when we will rule and reign with Christ, and His dominion will cover the earth, and the heavens and the earth can be renewed – all things made new.

I'm a worship leader and songwriter, and would love you to discover the songs and recordings I've been making. Click here or use the links and Spotify player below!